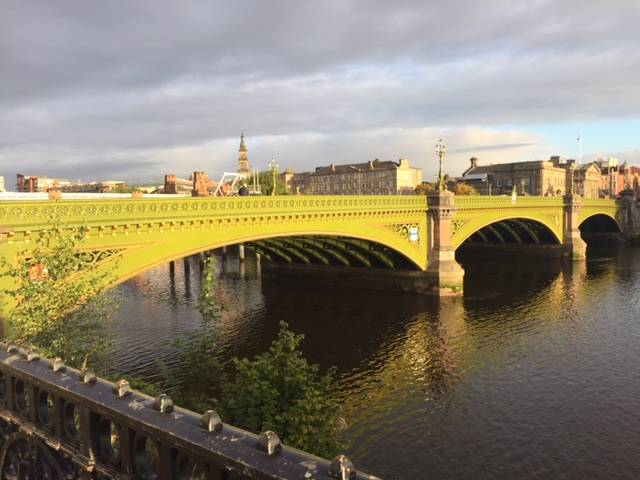 We carry out many large scale projects in iron across the architectural, engineering and construction sectors (to see a selection of these please click here), however it is often the large architectural conservation projects that we can be most proud of. And none more so than the extremely complex bridge restoration of the Albert Bridge, Glasgow.

The history of the bridge is as intricate and as complicated as the bridge itself, housing no fewer than 5 bridges on the current site dating back to 1794. The fifth and current structure was opened  on 21st June 1871 and cost £62,328 comprising three elliptical arch spans with a length of 124 metres and a width of 20 metres. It was designed by Engineer R. Bell & D. Miller of Glasgow and named after Prince Albert. The bridge was heralded as groundbreaking at the time of construction using new innovative engineering techniques. The most important of which was the use of granite piers founded on concrete pillars, that were encased in iron caissons to hard substrata approximately 86ft below low water level – a first in both Glasgow and Scotland.

The superstructure is eight arched wrought iron riveted girders. The piers are 11ft wide and are faced on the outside with white (now grey) Scottish granite. The arch ribs are ornamental cast iron work with a rope mounting following the outline of each arch. The spandrels are filled in with panels of scroll work and armorial shields. A cast iron cornice is fixed to the main edge girder and surmounted by a massive cast iron parapet, with panels at the centre of the bridge, bearing the ancient arms of the City of Glasgow.

As a testament to historic engineering and design the condition of the structure prior to works commencement was acceptable for supporting vehicular traffic crossing the deck. However strengthening of the parapets was required, to resist impact load requirements and the steel work urgently required repairs and application of a protective coating to prevent further deterioration. Ballantine Castings Ltd. was awarded the contract for the full conservation and replacement (castings and erection) of all 108 ornamental parapets, large and small lighting columns, life belt poles and central shields.

Whereas other historic bridge contracts such as Tournament Bridge were more ‘conservation’ projects, on the Albert Bridge, each new parapet section had to be tested to ensure impact resistance with the weight of vehicular traffic crossing the bridge. Each 1800mm parapet section consisted of 5 castings that had to be mechanically secured together prior to being erected onto the wrought iron substructure. Erection had to take place in individual sections to allow for 2 concrete pours. working over a tidal river further added to the complexities of the job.

Praise for the completed bridge restoration has been overwhelming with Local councillor Soryia Siddique, who campaigned for the bridge to be upgraded, welcoming the work coming to an end; “I am delighted the scheme to refurbish the A-listed bridge successfully secured funding and is nearing completion. The multi-million pound refurbishment programme has enhanced the local environment and restored the Grade A listed structure to its former glory. Thanks to the local community councils and residents who joined the campaign to improve the historic bridge – an architectural and engineering pride.”

And it is indeed with pride that Ballantine Castings looks at the final structure. Having completed all surveying, metallurgy, testing, pattern making, moulding, fettling, machining and fabrication in house, after a year of complex work, we can finally be proud of what we have achieved. And the Albert Bridge will be a structure that the whole of Glasgow, maybe even Scotland, can be proud of for generations to come. The project was given the final highest commendation being opened on 13/10/2016 by his Royal highness, The Earl of Wessex.